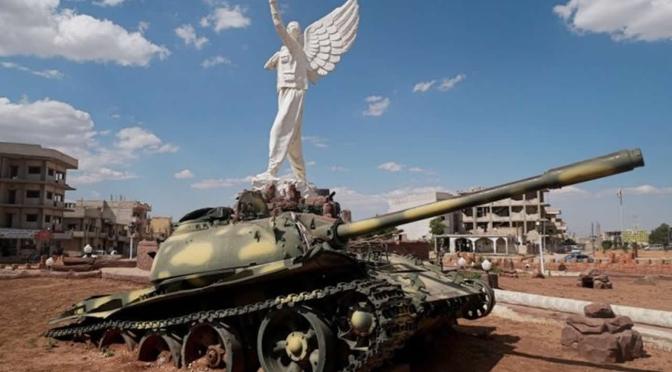 Elise Boyle Espinosa, University of Aberdeen For The Conversation

Kobanî, in the de facto autonomous region of northern Syria known as Rojava, was at the forefront of the battle against Islamic State (IS) back in 2014. With the aid of US airstrikes and Iraqi-trained Pêşmerge soldiers, the Kurdish People’s Protection Units (YPG) successfully repelled IS from the city in early 2015.

This marked a turning point in the battle against IS, with various Kurdish groups uniting along with Arab units as the Syrian Democratic Forces (SDF) and becoming the Western coalition’s primary ally. It was also a key moment for the Kurds in Syria taking part in what they call the “Rojava Revolution”, as they went on to secure the north of the country.

Going on behind the scenes was a quieter and, the Kurds in Rojava believe, more important ideological battle taking place in classrooms: what they call the “war of education”.

But after US President Donald Trump appeared to give a green light to the Turkish President Recep Tayyip Erdoğan, Turkey launched a ground and air offensive against the Kurds in northern Syria. And classroom advances are now under threat.

Preceded and surrounded by authoritarian regimes who have historically oppressed the Kurds and other minorities, the Rojava Revolution proposed a system based on diversity and inclusion of all ethnicities and religions, feminism, and ecology.

Along with my research partner, Adam Ronan, I spent five months in Syria, Turkey and Iraq between March and July 2018 researching the education system born from this revolution. In our research, which I am extending on in my ongoing PhD thesis, we found a wellspring of hope among young people.

Many teachers and students we spoke to for our research saw education as fundamental to this new society, achieved through “fighting with pens”, as described by Rojava’s Institute of Educational Science, responsible for curriculum design. The Syrian regime’s education system emphasises “just one language, one party, one politics”, forbids minorities from speaking their language and celebrating their unique cultures and histories. In contrast, the new education system in Rojava aims to foster respect between the different groups in Syria. Classes are taught in multiple languages: Kurmancî, the local Kurdish dialect, Arabic, and Syriac.

Students are educated about their own cultures and histories as well as those of others, which reasserts their own suppressed identities and builds tolerance of others. Rather than the authoritative style of education that characterised the Syrian regime, students are also encouraged to participate actively, with opportunities for feedback and discussion at all levels of the education system.

Underpinning all of this is what is referred to as a “new mentality”, one based on the values of a “democratic nation”. These are embedded in class discussions with topics that include “how different nations can live together” and “how we can bring peace to our society and all nations in our area”.

Since its humble beginnings in clandestine Kurmancî language classes prior to the revolution in northern Syria, the new education system has expanded to over 3,000 schools with over 300,000 students alone in the Cizîrê canton, one of Rojava’s three cantons.

We found that the students within Rojava’s education system that we interviewed were uniformly positive about these changes, and it has gone on to shape the vision of Syria in the future that students want. A middle school student explained to us

We want to succeed because we see ourselves in it, we see our society and culture inside it.

While the education system is by no means perfect or without contradictions, encouragingly, we found supporters of the revolution willing to engage with criticism of it. Its unique potential to bring together a fragmented nation, united through tolerance of diversity, makes it worth defending.

Dreaming of an alternative

It is precisely this hope of an alternative life that terrifies nationalistic Turkey. Visible from Rojava, separated by a thin stretch of landmines, lie Kurdish communities in Turkey who live in fear. The Kurdish flag, language, and cultural celebrations like Newroz (Kurdish New Year) are banned. Armoured tanks patrol towns that as recently as 2016 were the site of conflict between Kurdish separatist groups and the Turkish state in the southeast of the country.

As a representative from Rojava’s Institute of Educational Science explained to us, the states around them “want to make our system like their system. They want to destroy it”. While Turkey claims its invasion of Rojava is to protect civilians from what it calls terrorists, this ignores that the system has arisen from the very civilians they are proposing to liberate.

The Turkish invasion not only threatens to destabilise a region that has, thanks to the Kurds, been one of the most secure in Syria throughout the war, but also threatens the hope for future peace afforded by the revolution’s democratic potential.

This article is republished from The Conversation under a Creative Commons license. Read the original article.